The latest salvo in the battle between the Killingly school board and a group of residents over the addition of a school health center was fired this week in the form of a “complaint response” received by state investigators.

The board on Tuesday sent that document to the state Department of Education’s head of legal and governmental affairs laying out its reasoning why – contrary to a petitioning complaint – its March vote to reject a school-based health center, or SBHC was well within its statutory rights and doesn’t threaten student well-being.

“The complaint is not about the failure of a board of education to provide an integrated and comprehensive educational program designed to meet the needs of all students in a safe and nurturing learning environment,” the board’s Shipman & Goodwin LLP attorneys wrote. “Instead, it stems from a disagreement about a single decision of the Killingly Board of Education: whether or not the Board should provide space in its high school for Generations to provide private social work counseling services.”

The letter was filed after the state opened an investigation last month into “substantial” allegations brought forward through a citizens’ petition in the wake of a March 16 board vote that rejected the health center proposal.

Center supporters allege the board, through its March vote, failed to “provide the minimum services and supports necessary to deal with the social, emotional and mental health needs” of the district’s high school students.

Killingly Board of Education:Resignations, complaints, and an investigation: Killingly school board’s troubling year

“This is a situation in which a local school board of education has willfully and notoriously failed to implement the educational interests of the State, as guaranteed in the State Constitution,” wrote Attorney Andrew Feinstein, who is representing a group of center supporters, in an April 5 letter to the state commissioner of education.

If the complaint is upheld, the state could order the Killingly board to undertake a remedial process aimed at rectifying the lack of compliance.

The members who voted against the proposal have, at best, only given vague reasons for their opposition – much to the consternation of center supporters.

Under a draft plan created by Superintendent Robert Angeli – who recently said he’s still in favor of the proposal – licensed professional staff would have provided a range of behavioral and mental health services to high school students at no cost to the district.

In their 26-page complaint response, board attorneys argue state law gives local officials the discretion to reject proposals like the health center. They specifically and frequently cite a “five-year” proposed contract length with Generations – one that Angeli said could be shortened.

“Our statutes allow school districts to use public school space to provide such services, but does not compel any school district to do so,” the document states.

The board’s attorneys cite several examples they say are indicative of the district’s support of student mental health, including the board making Social Emotional Learning, or SEL, an “area of focus”; providing student support staff at levels that “exceed the state average”; and offering individualized student support programming.

The complaint response notes the board continues to explore “alternative proposals” to the health center option, including the introduction of peer mediation and anti-bullying programming, as well as adding more staff.

The response does not dispute allegations that the mental health needs of students have increased in the wake of the COVID-19 pandemic, but takes issue with the allegation of board indifference on the matter.

Of the 477 students, grades 7-12, who responded to a November survey by the non-profit SERAC group, 28.2% said they had thoughts of hurting themselves and 14.7% admitted to having a suicide plan.

Feinstein has until May 16 to file a response to the board’s document with the state.

In its request for the state to dismiss the complaint, board attorneys argue it’s not appropriate to view the Generations proposal “in isolation” when determining whether the district has added sufficient resources to create a safe school environment.

“The Board’s decision on this one issue does not make Killingly High School an unsafe school,” the response states.

Sun May 8 , 2022
Practicing breathing, finding your “why” and engaging in exercise you enjoy can all better your mental health. Image Credit: PeopleImages/iStock/GettyImages We all know regular physical activity comes with plenty of good-for-you-benefits, including a longer lifespan, a reduction in the risk of health issues (such as heart disease, diabetes and even […] 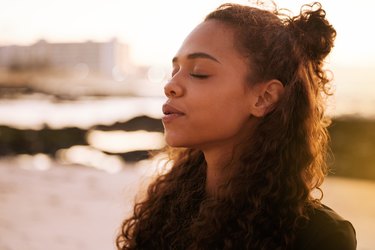