The term “big pharma” refers to the global pharmaceutical industry, which includes giant corporations that bring in billions of dollars in annual profit. The modern pharmaceutical industry has roots tracing back to the 19th century when research in areas such as chemistry and physiology allowed for the discovery of new drugs with medicinal qualities.

As the pharmaceutical industry developed and grew, a need for strong regulation emerged. Federal drug regulation began as early as 1848, but the U.S. Food and Drug Administration (FDA) did not get its name until 1930. It wasn’t until 1938 when a law was enacted that required new drugs to be subjected to a safety evaluation before they could be sold to the public. This requirement exists to this day in the form of clinical trials.

Today, the global pharmaceutical market is very big business, with annual revenues expected to top $1.5 trillion in 2023, according to the International Federation of Pharmaceutical Manufacturers & Associations. Many of the leading companies are involved in hundreds of clinical trials at a time and always looking for the next great drug breakthrough.

Investing in individual companies always comes with additional risk and the pharmaceutical industry is no exception. With the drug pipelines of pharmaceutical companies constantly changing and clinical drug trials succeeding and failing, you take on significant risk by holding the stock of just one drug company.

But the industry as a whole has provided stable returns over time. The iShares U.S. Pharmaceutical ETF (IHE), which tracks the performance of the U.S. drug industry, has returned nearly 11 percent annually over the past decade and has generated positive returns in 8 out of 10 years.

Pharmaceutical companies spend massive amounts of money on research and development (R&D) in order to discover new drugs that will propel them into the future. Global R&D spending by pharmaceutical companies reached $200 billion in 2020, according to Statista. Johnson & Johnson alone spent $14.7 billion on R&D in 2021, while Pfizer spent $13.8 billion.

When a company discovers a new drug, it’s given the exclusive marketing rights for a period of time as a reward for its R&D efforts. Once the drug comes off patent, generic drug manufacturers are able to produce and sell the drug at a significant discount, which impacts the business of the company that discovered the drug initially.

When analyzing companies for a potential investment, profit margin is one of the most important financial ratios to look at, and the pharmaceutical industry is impressive in this area. Profit margins measure how much a company makes in profit for each dollar of revenue it takes in.

Johnson & Johnson, Pfizer and AbbVie all earned operating profit margins well above 20 percent over each of the past 5 years. Pharmaceutical companies earned about 25 cents in operating profit for every dollar of revenue they took in compared to about 12 cents for the overall market, according to January 2022 data from New York University.

The high profit margins enjoyed by drug companies are partially due to the legal monopoly they receive on new drugs they develop, allowing them to price the product well above their costs.

Recent years have seen pharmaceutical giants go on a shopping spree, allowing some of the biggest players to get even bigger. In 2019 alone, Bristol Myers Squibb agreed to buy Celgene for about $74 billion, while AbbVie bought Allergan for about $63 billion. AstraZeneca announced its $39 billion deal for Alexion Pharmaceuticals in 2020.

These types of deals can allow companies to expand into new areas and protect themselves when key drugs are set to go off patent protection, creating new competition. Because the companies are so profitable, they often have strong balance sheets that can support large acquisitions.

Pharmaceutical companies are constantly searching for new drugs that can treat diseases or improve on the existing treatments. R&D spending supports this search at every step of the process, all the way from the initial research through the clinical trials.

Investing in the pharmaceutical industry has largely been and should continue to be profitable for investors. The industry enjoys high profit margins and generates significant cash flow for investors. If you’re buying individual stocks, make sure you understand the drugs that contribute most to the company’s earnings and when those drugs are set to go off patent protection. You’ll also want to get a sense for the relative strength of the pipeline.

Buying an ETF or mutual fund that tracks the pharmaceutical industry can be a great way to invest in drug companies without having to get in the weeds on individual products and companies. These funds hold companies throughout the industry, allowing you to profit off their strong economics. Here are a few popular options.

The iShares U.S. Pharmaceuticals ETF seeks to replicate the investment performance of an index that tracks U.S. pharmaceutical stocks. You’ll get exposure to companies that manufacture prescription and over-the-counter drugs or vaccines.

Fri Jun 10 , 2022
The Cove in Jersey City will encompass 1.4 million square feet of lab/tech office space High-Tech Collaboratives between the state’s universities and healthcare systems continue to spark innovation in the life sciences and medical fields. By Jim Pytell, Managing Editor On Jun 3, 2022 New Jersey, often referred to as […] 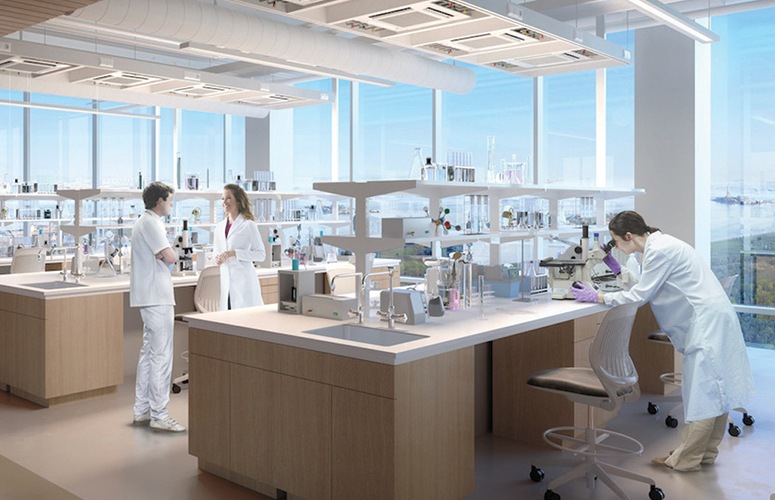